The action is based on allegations that Valeant's filings with securities regulators in Canada and the United States during the Relevant Period contained materially false or misleading statements. A copy of the Court's judgment is available.

The Court's decision grants the plaintiff leave to pursue claims under the QSA. Leave and authorization are procedural matters that define the form of the litigation. The action will now proceed toward trial. The Defendants dispute the claims asserted.

CalSTRS is represented by LCM Attorneys. 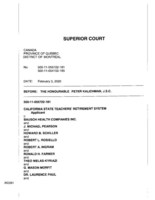 We want to thank the many editors, contributors, and reviewers that helped make this journal a leading publication in its field. We also want to thank you, the readers, for giving our efforts purpose and meaning. It has been a privilege serving you through our printed edition and online.

From the PharmD Corner

Up and Up They Go. Can Drug Prices Be Brought Down to Earth in 2019?
Dipal Patel, PharmD, RPh

Multiple Sclerosis: New Perspectives on the Patient Journey–2019 Update
Summary of an Actuarial Analysis and Report